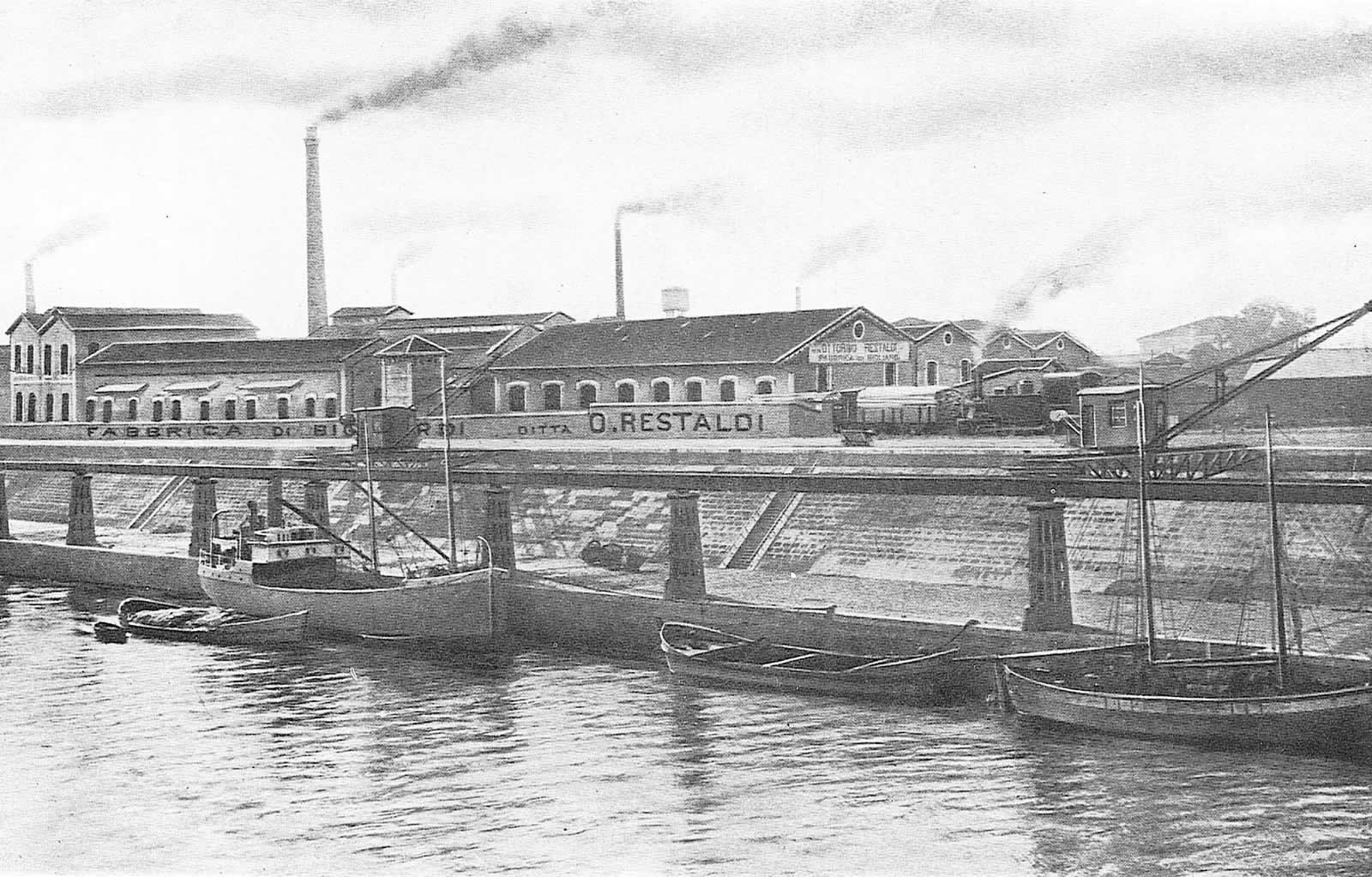 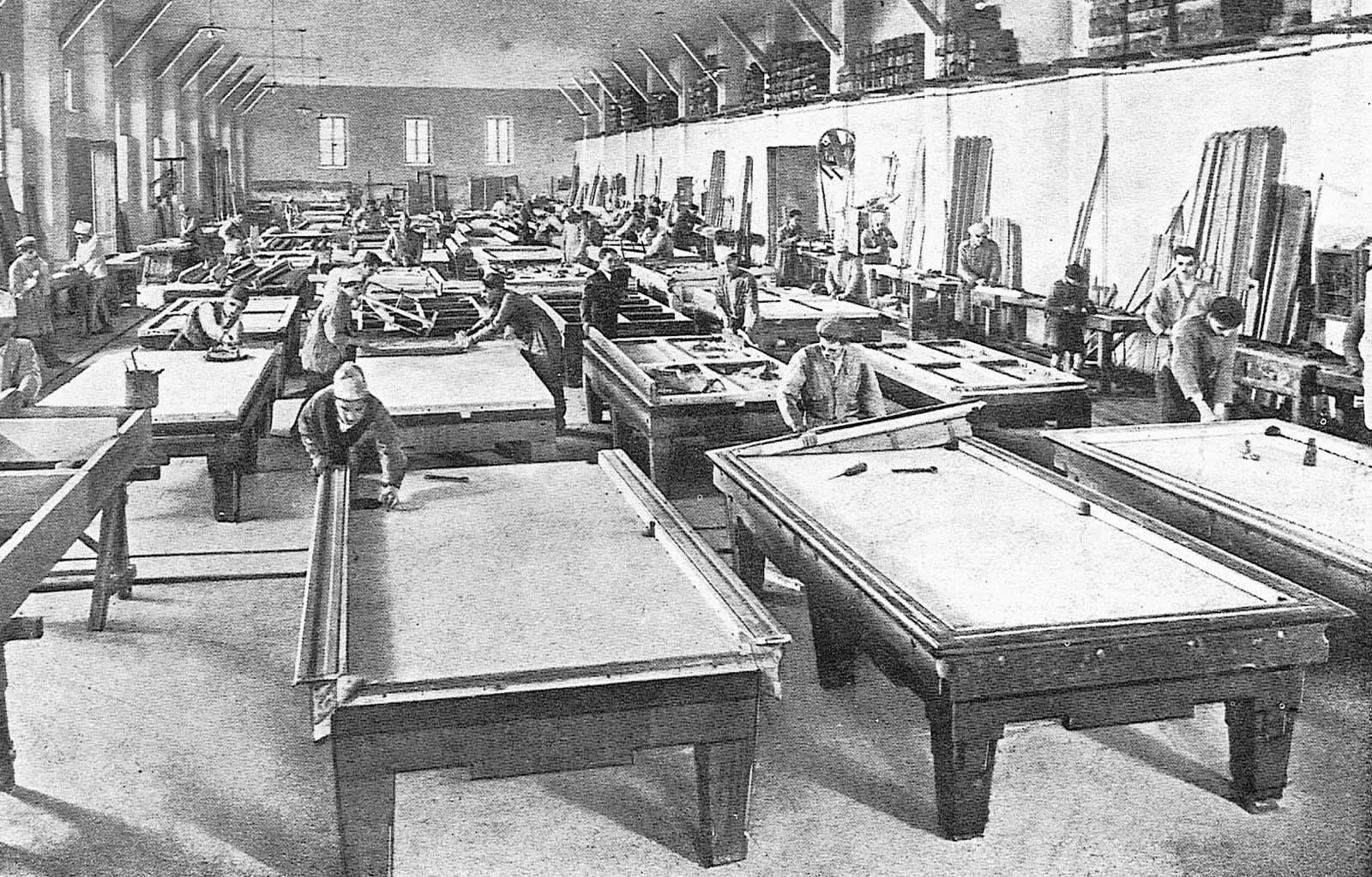 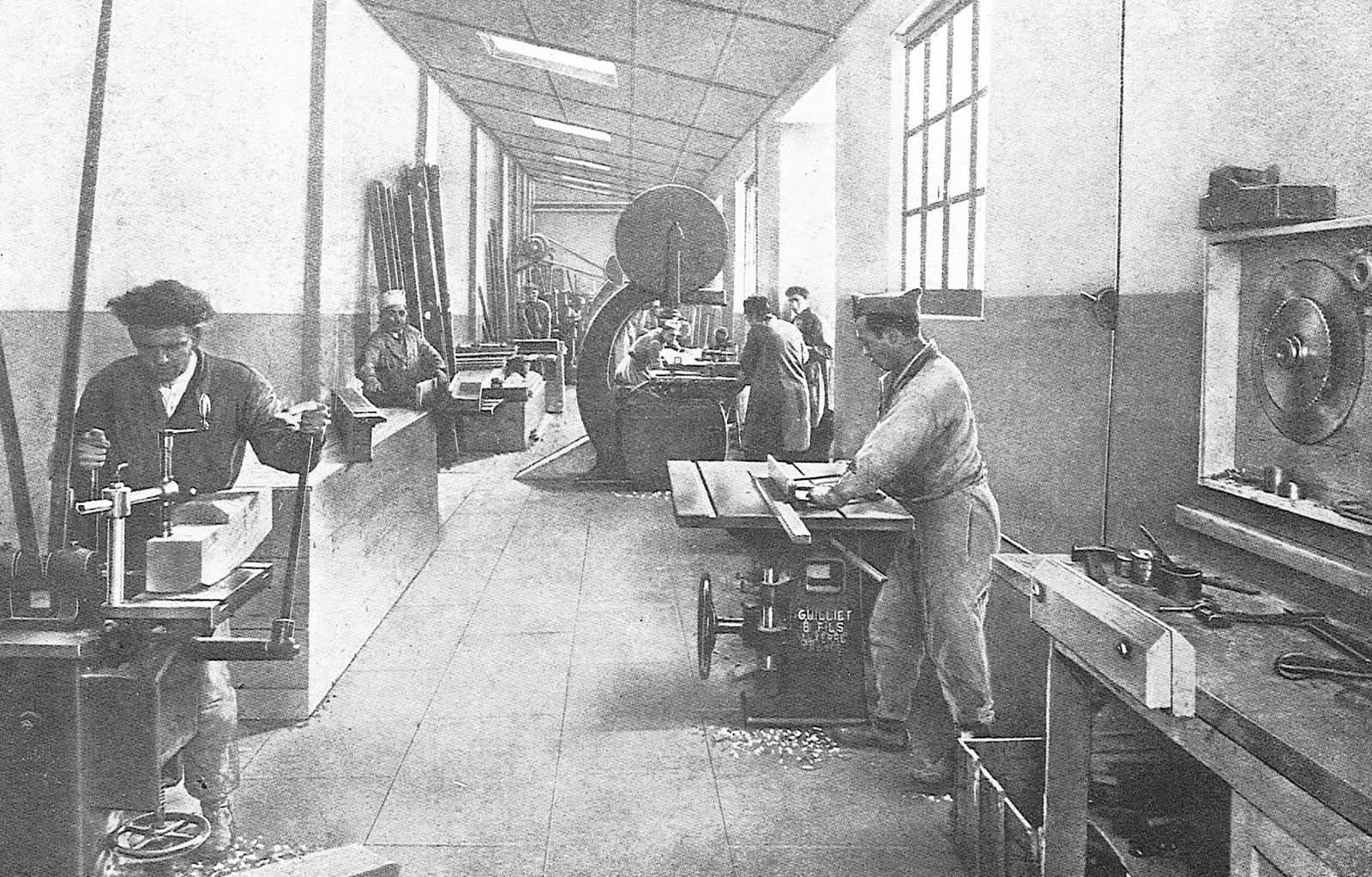 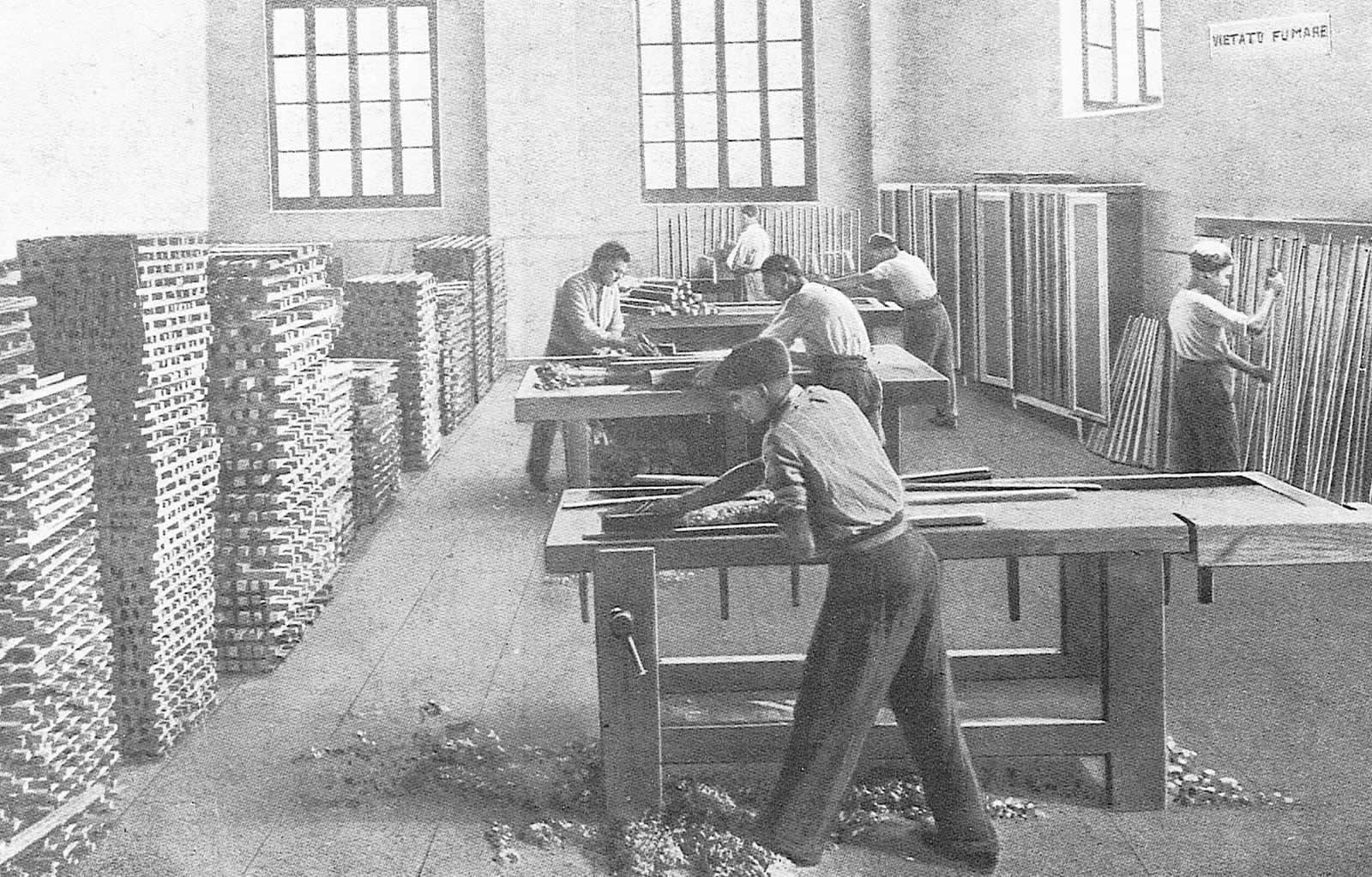 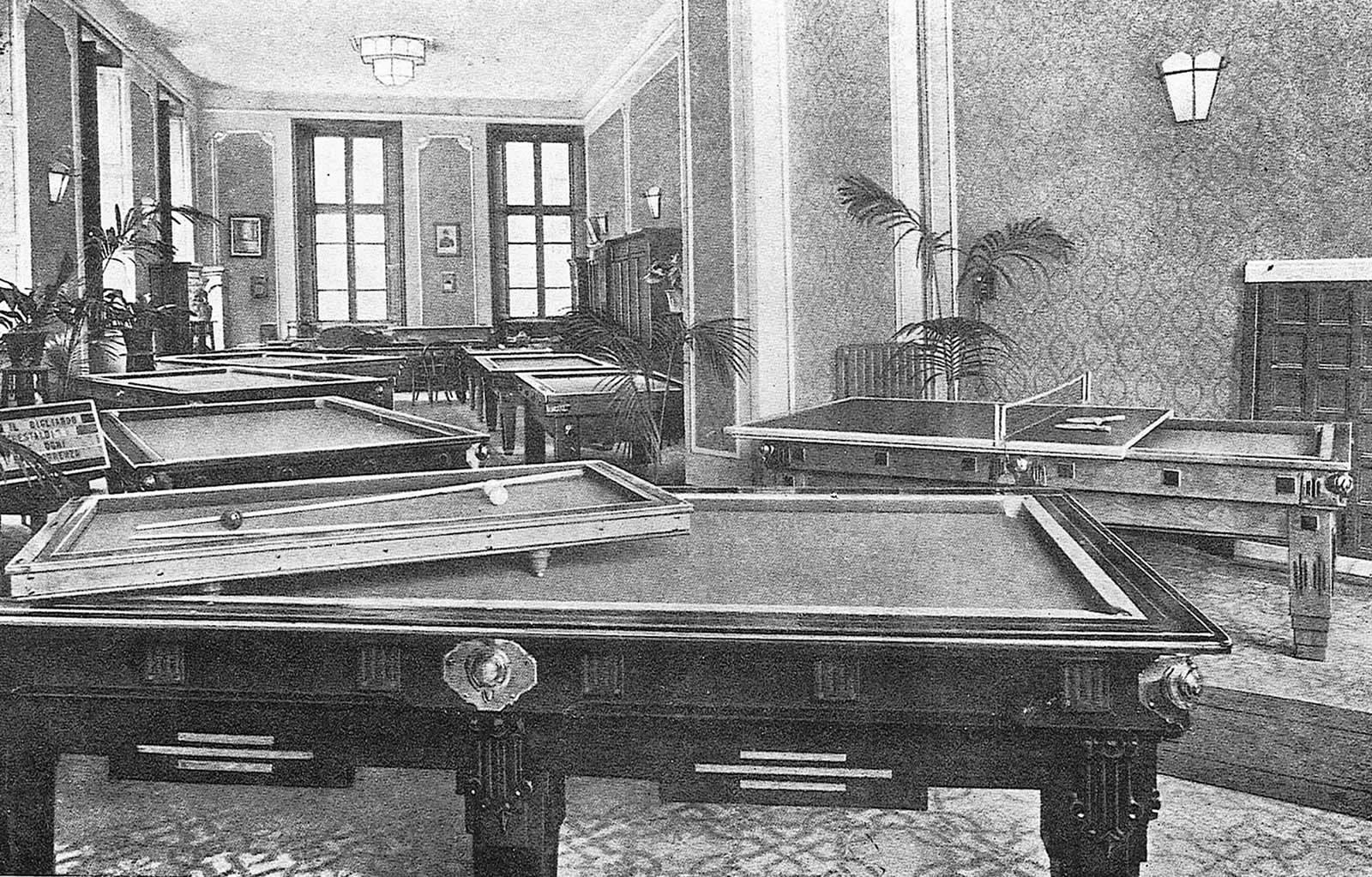 Everything started in Rome in 1763.It was in that year in fact, that Giovacchino Restaldi, already established as an experienced and refined wood artisan, after having been instructed and after perfecting through a long permanence in Paris, foundedthe Billiards Factory and Restoration Workshop. Obviusly The first billiards were constructed according to uses and systems adopted in France or better without holes and with edges in blackboard duster. Possessing a billiard room was then a privilege of the rich and it was a custom that the utmost care would be given to a piece of furniture, considered as an exquisite decoration element, part of luxury villas only.

The game was little known and the general techniques for its construction were not well refined; it was only thanks to Aristodemo Restaldi (1784), first builder of the biliardo italiano, that the billiard game underwent substantial change: six holes and six legs, and an increase of the general dimensions including those of the tables.

The high spreading of the billiard brought forth its production, so that in 1813 when Santi Restaldi inherited from its father industry and art, the game had already become the favorite sport of nobility and not only.The billiard started to reach, circles and the main cafés of the époque, eliciting the diffusion of the first billiards rooms increasingly frequented by young people, enthusiastic about the new way of playing due to the application of leather to the upper end of the cue. This Innovation was brought about, without mentioning it, by the same Santi who died in 1844. The son Salvatore Restaldi continued the family tradition, specializing in the construction of the edges to make of the billiards instruments of perfection. The continual requests pushed him then, enthusiastic, to amplify its plant, which was becoming more and more like an industrial establishment.

In 1874 the production, core of an important family tradition, passed to the brothers Cesare Restaldi and Santi Restaldi. The first used slab in the game plans, built until then, entirely in wood, but, the innovation did not seem of great importance, the billiards were kept nostalgically to their origins. The efforts of the Restaldi brothers where not paid back, industry was in full stagnation resenting southern competition, even in traditional fields linked to the Restaldi firm.

A positive feedback did not arrive too late. Ottorino Restaldi, the most important builder of all time, started in 1906 a long and personal struggle to propose and offer to the public billiards of special craft called Costruzione Americana Billiards.. The passing of months established the superiority of the Restaldi billiards, which could count on four fundamental characteristics: solidity, perfection, precision and softness in the cloth. In the first year of work more than 40 tables where built, a number which appears to be surprising.

The most important event concerning the activity and the creativity of Ottorino was in 1908 when he had the opportunity to acquire the patent as Official supplier of The Real Casa,an honorary title worthy of the best.

Only the war could stop Restaldi: we were in 1915 and our country needed to take up arms instead of a chisel. Once peace was reestablished, Ottorino reorganized his industry and amplified its plant, thanks to the use of the latest inventions for a precise and fast production.

Helped by his two sons, Mario e Cesare, Ottorino studied and experimented continuously without stopping, until he died in 1947.

Those where difficult years, the second world war had left many tangible effects on big factory production, Restaldi’s plant was located in Rome on the river Tevere and had been severely damaged. In this delicate period of reconstruction the personality of Felicetta emerged, she was the wife of Ottorino, a woman of former time, full of vigor and courage. A new location for the plant was eventually to be found and at the end, in 1967, after viewing locations built all around the city, the right sight was discovered on Via Salaria. Mario Restaldi started then the reconstruction of his company maintaining its central role in the Italian industry, presenting at the same time its models on a demanding and ever more selected and experienced market.

What before had been just an empty space, today is the location of one of the most important modern existing factories, Paramount example of a kind of Made in Italy ready to acquire new stimuli and perspective around an object: the billiard (both in the world of sport and in furnishing business for privates and companies) that on its turn is ready to face new challenge at the pick of its potential.

The PRESENT of Restaldi is represented by Claudio and Valerio (respectively son and grandson of Mario). Their challenge today, is to give the Pool a new collocation: to detach the billiard from the idea of gambling or from the typical collocation within luxury environments, to transform it in an OBJECT available for everyone, an object that could give extra value to any space ready to include it (either a home or a working place), an object attracting attention for both its beauty and versatility (transforming into a table), for its aggregation power in the involving game it represents and to which it invites its users. The FUTURE of Restaldi its the challenge FOOLISH, one extraordinary collection where the pool reaches the top as far as an object of desire..

See our Catalog of Antiques Ottorino Restaldi - 3 centuries of history